Direct from a client of ours, this Ogle SX1000 is a charming 1960s racing car, boasting intriguing provenance, and which offers an unusual but exciting entry to competitive historic events. Its engine is an FIA-specification 1293cc A-series inline-four, producing around 120bhp on race fuel, coupled to a four-speed competition manual transmission. The odometer indicates 2,105 miles since its bespoke build.

First registered in 1962, this car – chassis 004 – briefly belonged to the company’s founder, David Ogle, before he sadly died in a crash while driving a different SX1000. It subsequently passed to his wife, who stored it for 30 years. 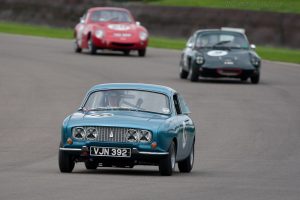 In 2001 an enthusiast acquired chassis 004 and set about turning it into a concours-quality car. In the region of £80,000 was spent on restoration, and the car was presented during the 2009 Goodwood Festival of Speed on the Cartier ‘Style et Luxe’ lawn.

Shortly after its appearance at Goodwood in pristine condition, the decision was made to take the work even further, transforming it into a competition car in tribute to the 1968 European Touring Car Champion, and in tribute to David Ogle as well.

The project was handed over to specialist Classic and Race in Surrey to complete. In essence, the restored car was to be modified to meet FIA Appendix K regulations, preparing it to compete in events such as the Goodwood Revival and the Silverstone Classic.

At the heart of the build is an FIA-specification A-series engine with a capacity of 1293cc, featuring a modified and strengthened block to use steel main caps, and a full racing cylinder head that has been ported and gas-flowed, and with Rimflow valves. It has a fully balanced Arrow crankshaft and con-rods, forged Omega pistons, a 649+ camshaft, 1.5 ratio rockers, and lightweight timing gear. Its ignition system uses a Crosthwaite and Gardiner curved points distributor, and Magnecor HT ignition leads.

The engine is fed via a Weber 45 DCOE carburettor with a long inlet manifold, and which takes its fuel supply from a 45-litre ATL safety cell. The exhaust gases exit via a Maniflow racing megaphone system. This SX1000 was built to run with 105-octane fuel at around 120bhp, which makes the little Ogle a genuinely quick car. The engine was last refreshed after the 75th Goodwood Members’ Meeting, and it has only done two races since then.

Its 1293cc motor is coupled to a four-speed manual transmission, equipped with an MED dog-engagement competition gear kit, straight-cut d 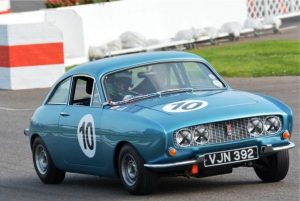 rop and primary gears with a roller bearing idler, and a modified gear selector housing. It is mated to an MED plate-type differential with a 3.8:1 straight-cut crown wheel and pinion, and with an ultra-lightweight flywheel and competition clutch. The driveline is rounded off by heavy-duty Hardy Spicer type shaft couplings.

The car rides on competition race rubber cone suspension with Spax dampers. There are also rose petal alloy wheels running on Dunlop CR65 tyres, and the Ogle has received a professional steering geometry setup with corner weighting. Braking is by Mini Cooper S front discs and calipers with Hawk Blue racing pads, and rear hydraulic drums. Its electrics are run off a dry-cell battery with a high output racing alternator.

Inside, there is a bespoke roll cage made by Caged Laser Engineering, as well as a Tillett racing seat with FIA-specification mounts, and a Lifeline foam fire extinguisher system. The car meets all competition safety requirements from the MSA and FIA. 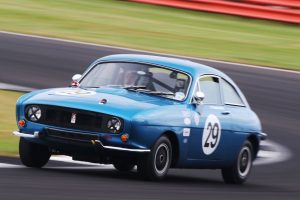 As regards the race eligibility, it has valid FIA Historic Technical Passport (HTP) paperwork that expires in 2026. It is eligible to compete in HRDC and HSCC series events, the Goodwood Revival, the Silverstone Classic and possibly Equipe GTS. It can certainly take part in the Motoring Racing Legends pre-‘63 GT events, and the GT and Sports Car Cup race series.

For racing in FIA pre-‘63 GT races, the car typically has to be built no later than 31 December 1962. However, it can have a later homologation like the Ogle presented here, which was homologated in 1966, but has been confirmed as accepted by both Goodwood and Silverstone.

The car has already made appearances in the Fordwater Trophy – in 2010 and 2014 – as well as the 2017 Goodwood Members’ Meeting Westlake Cup. It was present at the 2019 Goodwood Revival display and parade car session, and has competed in at least five pre-‘63 GT races at the Silverstone Classic. In July 2019, it was rubbing shoulders with Lotus Elites and an Alfa Romeo Giulietta SZ in the RAC TT for pre-‘63 historic cars.

Today, the bodywork presents in very good order, and has only some minor stone chips from fast circuit use. Because it had previously been prepared to concours standards, the blue paint finish remains in surprisingly good condition for a racing car, with a deep shine around all the panels. It also had some bodywork repairs in mid-2017, by the same company that did the first concours paint preparation, after a minor rear-end collision during testing for the Silverstone Classic. 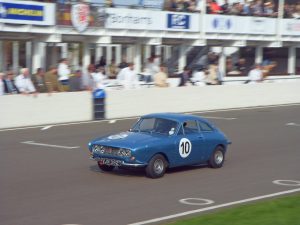 This little Ogle has proved to be a reliable competitor so far, and the seller reports no faults or electrical issues whatsoever. The car has received yearly maintenance and fettling to ensure it remains in on-the-button condition.

Accompanying the car are two large history files, documenting the work behind the car’s fastidious restoration and conversion, as well as its recent racing achievements. It also has full FIA HTP papers valid until 2026.

This Ogle SX1000 is a rare and entertaining racer, which is presented in superb cosmetic and mechanical condition, and represents an approachable car for someone who wants to experience the thrill of real competition. It has been well raced at the Goodwood Revival, Members’ Meeting, and the Silverstone Classic, and is now a familiar sight to many enthusiasts in the community. A solid competitor, and one that has a great story to tell, this could prove to be a fantastic ‘gateway classic’ into historic racing for its next owner.

Our Round Up – The Chateau Impney Hill Climb